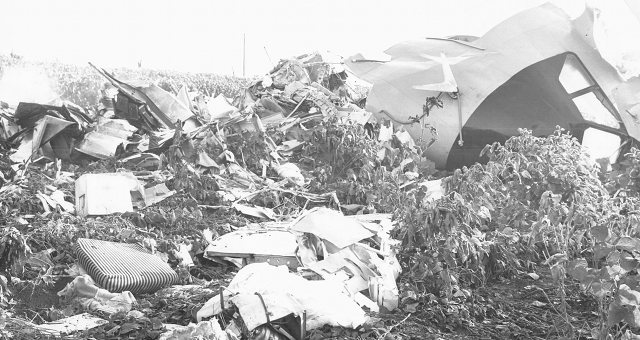 [Note: Some files are large and will take longer to access on slower internet connections.]

• Passenger/Crew Funeral Details. Braniff kept these status reports to track everything from who in the victims’ families were informed and when, to funeral homes, positive identification status, and other miscellaneous details.
[Courtesy University of Texas at Dallas-Richardson Braniff Archives.]

• Air Traffic: | Tracks of Flights in the Area when Braniff 250 was destroyed.
• 1. Tracking Map is an approximation based on NTSB/FAA data.
On this map you will see:
• A red line representing the flight track of Braniff flight 250 between KMCI and the crash site near Falls City, NE.
• A black line representing an American Airlines Convair 580 twin-engine propeller flight between KOMA and KSTJ.
• A purple Line representing Braniff flight 234, originally travelling KSTL-KDSM, but was diverted down to KMCI when approaching front made weather too hazardous to proceed to Des Moines. The flight landed safely in Kansas City.
• A blue line representing Braniff flight 255 from KOMA to KMCI. This flight diverted due east after departure, then flew due south to Kansas City. It encountered very rough turbulence and discussed this with flight 250’s flight crew.
• 2. NTSB graphic representation of the one-mile square area of farmland near Falls City, NE. | This shows how the debris from the in-flight breakup of N1553 was distributed by wind and gravity to the soybean fields below.The Antone Schawang family home is located at the “M” in the word “Main Impact, just across the street from the bulk of the wreckage.
[NTSB diagram. Graphics by Steve Pollock from NTSB and FAA sources.]